“This budget is designed to deliver strong baseline cash flow from the upstream business while advancing power projects toward FID,” said CEO Pat Carlson. “The 2022 budget is a further step toward our goal of being a low-cost supplier of natural gas and reliable, dispatchable, low-emission gas-fired and renewable electricity.”

Kiwetinohk has allocated $10 to $20 million of capital in 2022 for pre-FID planning and approvals and securing financing to advance power projects to FID. The Company expects to spend, depending on the project, $3 to $8 million to bring each project to FID. At FID, the Company expects to retain a carried-partnership interest that reflects the higher risk to which it has been exposed to achieve FID. Although Kiwetinohk is also considering other financial structures, this approach to financing, when it works as planned, will enable Kiwetinohk to participate in projects of this nature with returns aligned with its upstream business.

The five power projects with a total nameplate generation capacity of 1,800 MW in early-stage development include:

The Company is targeting to have a 400 MW solar project and the 101 MW Firm Renewable project achieve FID by year-end 2022.

Kiwetinohk made significant progress in 2021 in advancing its diversified, solar and gas-fired development power portfolio including site selection and acquisition, permitting, environmental studies, community engagement, AESO stage advancement and engineering and economic evaluation. In addition to its ongoing greenfield development program, the Company is evaluating acquisition and partnership opportunities for pre-construction solar and wind projects, as well as hydrogen production opportunities, which complement and expand Kiwetinohk’s existing power portfolio. The Company has updated the target FID and Commercial Operation Date (COD) for its first Firm Renewable and its 400 MW solar project to year-end 2022 and year-end 2024.

The Company’s ten-year vision is to generate over 1,500 MW of electricity (over 10% of Alberta grid capacity) from solar, wind and natural gas, with a goal to capture over 90% of the carbon associated with the Company’s gas-fired power and hydrogen production operations.

The Fox Creek core area provides a low decline production base from which to grow but also requires some investment lead-time due to under-investment for the past few years. Kiwetinohk plans to invest in Fox Creek to increase production and cash flow. Future free cash flow can be channeled to fund additional green energy investment and return capital to investors. The plan is to integrate low-cost natural gas production with clean, reliable, dispatchable and low-cost electricity and hydrogen. The Company acquired these assets for ~$10/boe Proved Developed Producing (PDP) Reserves, or ~$4/boe Total Proved (TP) Reserves, and the assets had a operating netback (before financial hedging) of ~$31/boe in the third quarter of 2021, resulting in a >3x recycle ratio(4).

2022 will be an investment year to arrest declines and commence growing production to fill the property’s facilities, which are currently operating at less than half capacity at Fox Creek. A total of $170 to $185 million is budgeted for drilling, completing, equipping and tie-in (DCET) activity during 2022. The production profile will be back-end weighted with 5 of 11 new wells anticipated to come on production in 2023. As a result of the planned drilling schedule, Kiwetinohk expects production to average 20,000 to 21,000 boe/d during the first quarter of 2023 increasing from currently expected production for first quarter of 2022 of 11,000 to 12,000 boe/d. Anticipated production for Q1 2022 reflects:

The result is the current decline rate from Q3 2021 to Q1 2022 appears steeper than the established decline rate of the area. The Fox Creek assets have only had a modest amount of capital spent on drilling in recent years by previous operators. As such, the annual production decline rates are relatively shallow in comparison to tight shale gas resource assets that have experienced more consistent allocation of drilling capital. When deploying a significant amount of capital to such upstream assets that have not been drilled for a number of years, the Company expects that the first year of production growth (i.e. 2023 over 2022) will be at a very high rate moderating with time and ongoing drilling.

There are no land expiry issues driving the Company’s operating plans in the Fox Creek Duvernay. After the development program is underway, the investments of one year will better align with the production additions from the prior year of investment for accurate annual capital efficiency calculations.

In the Montney, two wells (gross/net) drilled in late 2021 are scheduled for tie-in during the second quarter of 2022. One step-out delineation well (0.65 net) is planned during 2022 with an early 2023 tie-in, therefore not contributing to 2022 production or cash flow.

The Company’s producing assets, in the vast majority, are tight shale gas resources. The Company uses horizontal wells with multiple hydraulic fractures along the horizontal lateral. In Kiwetinohk’s view, this technology is not mature and reliable models based on physics and/or statistics do not exist. Despite the inadequacies of the approach, the Company looks for correlation between well performance and controllable factors (such as well lateral spacing, lateral length, number of fracs, frac slurry volume, frac pump rate) and uncontrollable factors (such as pressure-depth ratio, resource thickness, condensate to gas ratio, original gas in place per square metre). Performance is thereby estimated with reservations about accuracy from judgements made relative to this kind of data analysis. In order to account for unexpected outcomes, the Company includes capital without production for 1 well out of each 10 planned.

Kiwetinohk has ~$30 million of inactive ARO(5) liabilities, which it expects to retire over the next 5 to 7 years. Kiwetinohk maintains an attractive Alberta Energy Regulator’s (AER) LMR Liability Rating over 5.

Kiwetinohk has a risk management program designed to protect returns on capital deployed. The Company targets to hedge up to 75% of its first 12 months of future production as it is brought onstream. To date, Kiwetinohk has used a combination of fixed price swaps and costless collars. Please see the Company’s updated hedging summary below for a full detail of Kiwetinohk’s current hedging contracts.

As Kiwetinohk advances its green energy projects toward FID it will look to contract power and hydrogen as appropriate. 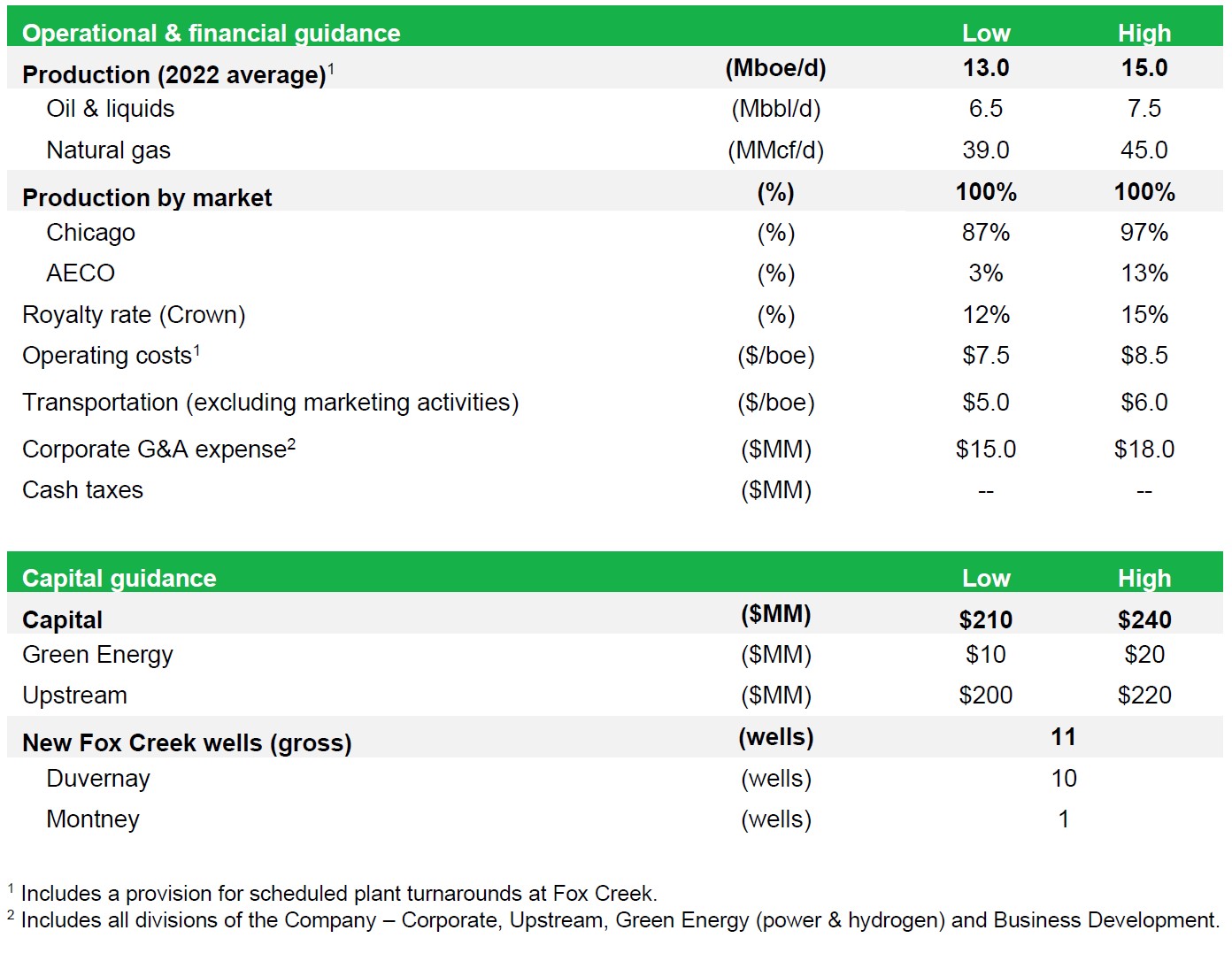 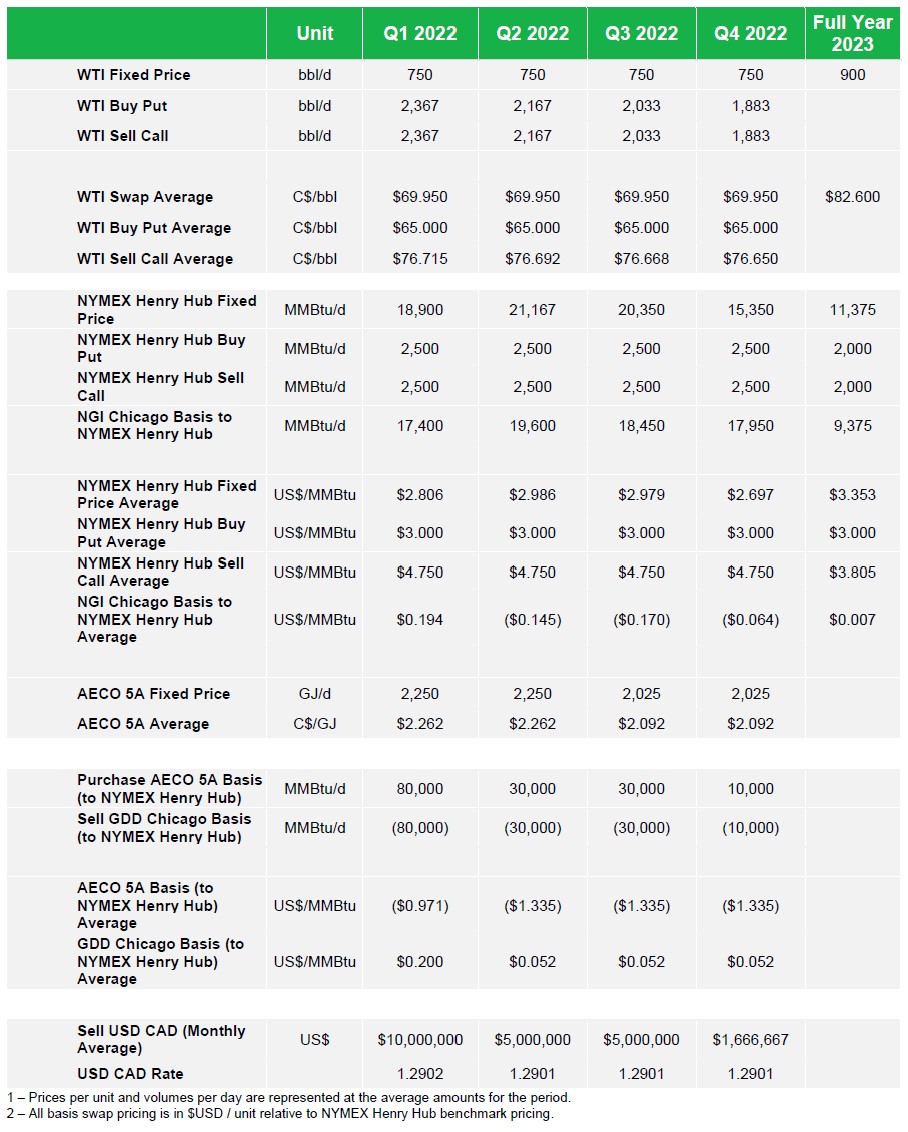 Notes to the news release

2 Return on average capital employed is a non-GAAP measure. See disclaimer regarding “Non-GAAP Measures” below.

3 The term “Firm Renewable” is a Kiwetinohk-originated term that describes efficient, flexible-output, fast-responding, gas-fired, internal reciprocating engine-driven power generation that addresses the need for stability that has been revealed as solar and wind renewable grows to become a significant proportion of a grid’s power supply. Firm Renewable bridges supply gaps related to intermittency of renewables and system outages while maximizing opportunity to capture power price spikes.

4 Reserves estimates are based upon the report prepared McDaniel & Associates Consultants Ltd. dated July 16, 2021, evaluating the reserves attributable to certain of the assets of Kiwetinohk and its subsidiaries as at July 1, 2021, assuming completion of the business combination of Kiwetinohk and Distinction Energy Corp. and an effective date of July 1, 2021

Operating netback is a non-GAAP measure. See disclaimer regarding “Non-GAAP Measures” below.

Recycle ratio is defined as the operating netback divided by the acquisition cost of the PDP reserves. This is calculated on a boe basis.

Certain information set forth in this document contains forward-looking information and statements including, without limitation, management’s business strategy, management’s assessment of future plans and operations. Such forward-looking statements or information are provided for the purpose of providing information about management’s current expectations and plans relating to the future. Forward-looking statements or information typically contain statements with words such as “anticipate”, “believe”, “expect”, “plan”, “intend”, “estimate”, “propose”, “project”, “potential” or similar words suggesting future outcomes or statements regarding future performance and outlook. Readers are cautioned that assumptions used in the preparation of such information may prove to be incorrect. Events or circumstances may cause actual results to differ materially from those predicted as a result of numerous known and unknown risks, uncertainties and other factors, many of which are beyond the control of the Company.

Specifically, this document contains forward-looking statements pertaining to: the Company’s 2022 capital expenditures budget and allocations thereof; 2022 production guidance; drilling, advancement and completion of wells in the Fox Creek area and the timing associated with drilling and completion of the wells; the Company’s objectives, strategies and competitive strengths and weaknesses; the Company’s growth strategy; the Company’s plans for developing a low emission power generation business, including development of its natural gas-fired and solar and wind power generation projects and expectations with respect to future opportunities for other renewable energy projects; the Company’s ability to achieve its goals, including the Company’s ability to: bring its natural gas production into equivalent proportion with its use of natural gas for hydrogen and electricity production; and capture and utilize more than 90% of the carbon dioxide associated with Scope 1 emissions; timing for listing of the Company’s shares on the TSX; allocation of future free cash flow to fund additional green energy investment and return of capital to investors; anticipated strong production, revenue and cash flow growth late in 2022 and into 2023 resulting from drilling and completion of wells in 2021 and 2022; the magnitude of the Company’s contingent payment obligations arising from the property acquisition in April 2021; and 2022 operational and financial guidance.

In addition to other factors and assumptions that may be identified in this document, assumptions have been made regarding, among other things:

Readers are cautioned that the foregoing list is not exhaustive of all factors and assumptions that have been used. Although the Company believes that the expectations reflected in such forward-looking statements or information are reasonable, undue reliance should not be placed on forward-looking statements as the Company can give no assurance that such expectations will prove to be correct.

Readers are cautioned that the foregoing list is not exhaustive of all possible risks and uncertainties.

This news release contains measures that do not have a standardized meaning under generally accepted accounting principles (“GAAP”) and therefore may not be comparable to similar measures presented by other entities. These performance measures presented in this document should not be considered in isolation or as a substitute for performance measures prepared in accordance with GAAP and should be read in conjunction with the consolidated financial statements of the Company. Readers are cautioned that these non-GAAP measures do not have any standardized meanings and should not be used to make comparisons between Kiwetinohk and other companies without also taking into account any differences in the method by which the calculations are prepared.

Operating netback is calculated on a per boe basis as petroleum and natural gas revenue from production (before hedging) less royalties, operating and transportation expense.

The term “boe” may be misleading, particularly if used in isolation. A boe conversion rate of six thousand cubic feet of natural gas per barrel of oil (6 mcf:1 bbl) is based on an energy equivalency conversion method primarily applicable at the burner tip and do not represent a value equivalency at the wellhead. Given that the value ratio based on the current price of crude oil as compared to natural gas is significantly different from an energy equivalency of 6:1, utilizing a conversion ratio of 6:1 may be misleading as an indication of value.

barrel of oil equivalent, including crude oil, condensate, natural gas liquids, and natural gas (converted on the basis of one boe per six mcf of natural gas)

barrel of oil equivalent per day

West Texas Intermediate, which is an oil benchmark

We, at Kiwetinohk, are passionate about climate change and the future of energy. Kiwetinohk’s mission is to build a profitable energy transition business providing clean, reliable, dispatchable, low-cost energy. Kiwetinohk develops and produces natural gas and related products and is in the process of developing renewable, natural gas-fired power, carbon capture and hydrogen clean energy projects. We view climate change with a sense of urgency, and we want to make a difference.

Kiwetinohk is a reporting issuer and additional information is available on Kiwetinohk’s SEDAR profile at www.sedar.com.